Poster presented at QIP’22, and accepted at TQC’22.
Abstract: Boosting is an ensemble learning method that converts a weak learner into a strong learner. Recently, Arunachalam and Maity presented the first quantum boosting algorithm QAdaBoost for weak learners with binary hypotheses with similar theoretical guarantees to the classical Godel prize-winning AdaBoost algorithm. QAdaBoost is quadratically faster than AdaBoost in terms of the VC-dimension of the hypothesis class of the weak learner but polynomially worse in the bias of the weak learner.
Izdebski et al. posed an open question on whether we can boost quantum weak learners that output non-binary hypothesis. This work answers it by developing the QRealBoost algorithm motivated by the classical RealBoost algorithm. The main technical challenge was to provide provable guarantees for convergence, generalization bounds, and quantum speedup, given that quantum subroutines are noisy and probabilistic. We prove that QRealBoost retains the quadratic speedup of QAdaBoost over AdaBoost and further achieves a polynomial speedup over QAdaBoost in terms of both the bias of the learner and the time taken by the learner to learn the target concept class.
Finally, we perform empirical evaluations on QRealBoost and report encouraging observations on quantum simulators by benchmarking the convergence performance of QRealBoost against QAdaBoost, AdaBoost, and RealBoost on a subset of the MNIST dataset and Breast Cancer Wisconsin dataset. 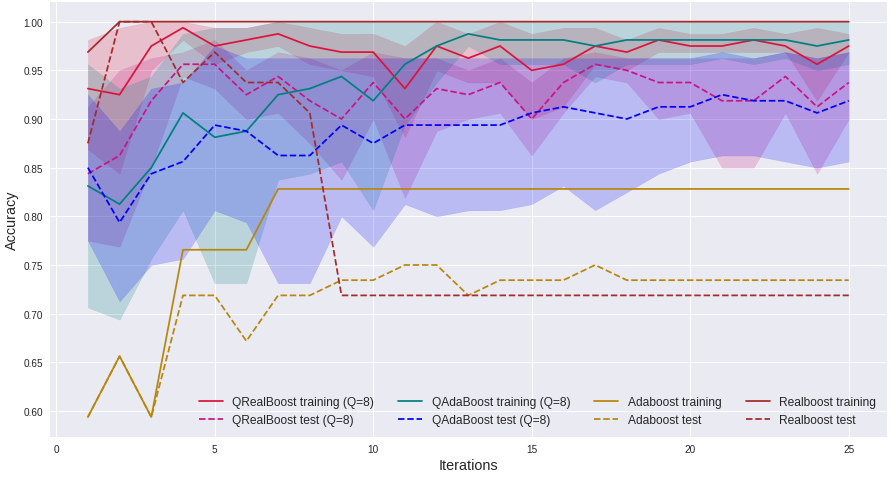 Poster presented at QIP’21, and Extended abstract acceptance at AQIS’20.
Abstract: Counting problems with respect to matchings are #P-hard; which precludes the existence of efficient deterministic classical algorithms for creating superpositions over all distinct matchings and all maximal matchings.
In this work, we try to achieve these superpositions for 2-regular graphs by designing polynomial depth QAOA+ style circuits with novel mixing operators. We also evaluate the performance differences of two different efficiently creatable input quantum states corresponding to - the empty matching, and to a superposition over all matchings of size 1 with a non-zero amplitude (W-state).
We also emprically demonstrate that for 2-regular graphs, our algorithm has a better lower bound for the expected matching size compared to the uniform distribution over all matchings. 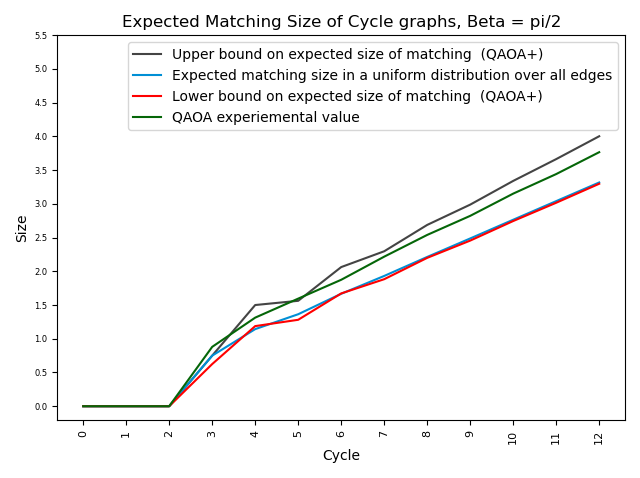 This was a talk at the weekly Theoretical CS seminar at IIT Delhi on the joint work with my advisor, Rohan Bhatia, and Parmeet Singh Chani.
These are the Slides for the talk.

An overview of Quantum Optimization and Quantum Machine Learning

This was an invited talk at the Faculty Development Program at the JNTU, Anantapuram, India. The talk focuses on introductory concepts and serves as a gateway into the field. The total duration of the talk was 3 hours divided over two sessions. These are the Slides for the talk.

Oracle Separation of BQP and PH

This was a presentation at my Complexity Theory Course in the Fall of 2020. The talk focuses on the paper by Ran Raz and Avishay Tal, and explains the main concepts and proof techniques explored in the paper. The total duration of the talk was 50 minutes with 10 minutes for Q&A. MySlides. Original Paper Oracle separation of BQP and PH (Raz-Tal).

The HHL algorithm for solving linear system of equations.

This was a Gong Show talk I gave at the 4th Advanced School of CSE, hosted by the Israel Institute of Advanced Studies, Jerusalem. I have linked the slides, and the video below. I have also provided my revised notes which I had contributed towards the “Teach Me Quantum” category of the IBMQ awards (2019-2020), in which we won the second place prize.
My Notes, Slides.

I was one of the two grad students from India to be selected for this prestigious winter school organized by the Israel Institute for Advanced studies, at the Hebrew University of Jerusalem. The school served as brief introductions to the fields of quantum algorithms, quantum error correction, quantum supremacy, delegation and verification, interactive proofs, cryptography, and Hamiltonian complexity along with detailed TA sessions for a week. Check out the youtube video of my Gong Talk on the HHL algorithm (starts around the 6 min mark).

We finished runners up in the “Teach Me Quantum” category of the IBMQ awards (2019-2020). Check out the Github repo for the course here. We designed an 11-week course covering concepts in quantum physics, quantum chemistry, mathematics, complexity theory, cryptography, ensemble based learning and much more. This is an excellent starting point for people from backgrounds in physics, mathematics, chemistry and computer science with exercise questions tailored specifically towards these domains.

I was the only grad student to be a part of the 2021 workshop on Quantum Information Science and Engineering organizing committee. My duties consisted mostly of technical logistics since this was an international workshop with overlapping timezones. This is the website for the workshop (desktop browsers recommended).

I was selected to attend a workshop on Sensitivity, Query Complexity, Communication Complexity and Fourier Analysis of Boolean Functions organized by the Indian Statistical Institute, Calcutta.